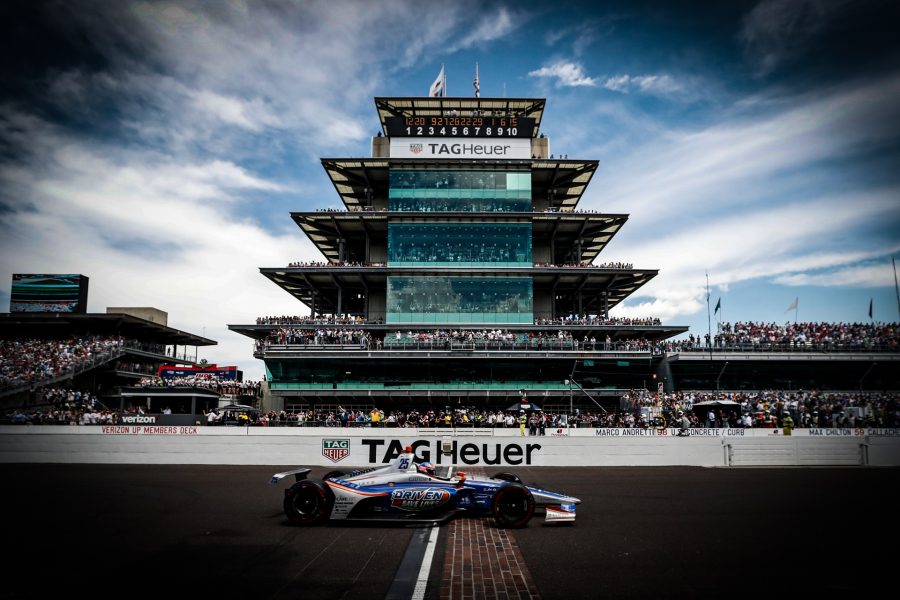 INDIANAPOLIS, IND. (May 28, 2018) – Stefan Wilson stunned over 350,000 spectators in attendance at the Indianapolis Motor Speedway on Sunday by almost winning the 102nd Running of the Indianapolis 500. The 28 year-old came within four laps of winning the largest one-day sporting event in the world, but was forced to make a last-minute pit stop to add fuel. The stop relegated Wilson to 15th in his second start at the event.

“It was so close, a hell of a strategy call by the team,” said Wilson, who led laps 193-196 and got so close to leading the most important one, lap 200. “The No. 25 Driven2SaveLives Intelisys team did a great job all day. With that strategy call we knew we were gambling, we knew we were rolling the dice. We were just hoping for another yellow flag at the end. I was leading, and I knew we were strong enough to hold off the competition. While I was out there leading, I was just out there thinking if it goes yellow now my dreams are made. It didn’t happen, but we led our first laps, we learned a lot this month and it was mad fun, so I’m leaving here with a smile on my face and my head held high.”

Last weekend, Wilson qualified 23rd which put the Briton in the middle of row nine for the start of the Indianapolis 500. With record high temperature and humidity levels, the race was anything but easy to manage and saw even the most experienced drivers in the field stumble.

Going off strategy around the mid-point of the 500-mile race, it looked like Wilson and his Andretti Autosport crew might have a shot at the race win. When the leaders pitted for their last time, Wilson was elevated to second, having spent considerable time in fuel-save mode. With seven laps to go, the race went back to green and Wilson made a daring, three-wide move around the outside of Oriol Servia and Jack Harvey to take the lead. He would run away from the field for the next couple of laps, hoping for a yellow flag to come out to make the fuel strategy work.

But it wasn’t to be for Wilson as he had to pit at the end of lap 196 for a splash of fuel to finish the race. Thanks to a quick stop, Wilson was able to recover to finish 15th across the line.

“I couldn’t do this without my partners and I’m lucky to have a long list of those behind me,” said Wilson. “I almost felt like I could hear them cheering me on when I took the lead and I just wish we could have taken it all the way together. Had it not been for Driven2SaveLives, Intelisys, Canoe Studios, I Am Second, Graystone Consulting, Indiana Donor Network, Donate Life Colorado, Global Communication Networks, Gap Guard, Hull & Knarr, Inovateus Solar, Liberty Group, Neptune Systems, Onward Communications, ROI Communications, Rylo, The Children’s TherAplay Foundation, Three Points Racing Foundation, Topping & Legnon Wines, USWAG, VSRS Motorsports and CareLert, none of this would be possible.”

“I also owe a huge thank you to Andretti Autosport and Honda for their amazing support. They gave me everything I needed to get up to speed and be competitive from the very first session on track. I don’t know what the future holds, but I certainly hope to be back with Andretti again in the future.”