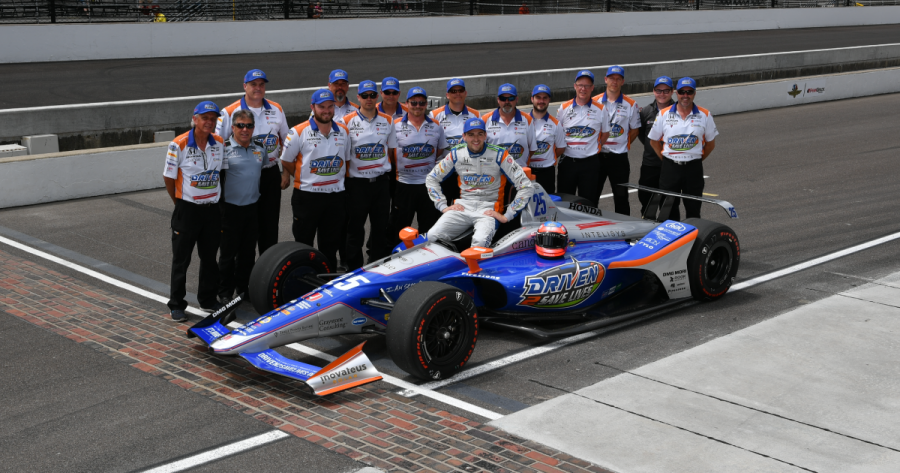 INDIANAPOLIS, IND. (May 20, 2018) – In his return to the Indianapolis Motor Speedway, Stefan Wilson starred during qualifying for the 102nd Running of the Indianapolis 500. During yesterday’s Bump Day, the driver of the No. 25 Driven2SaveLives Intelisys Honda qualified 22nd out of 35 cars. Today, he secured a spot in the middle of row eight for the race which will take the green flag a week from today.

With four days of practice virtually unaffected by weather, Bump Day was a stark contrast with over three and a half hours of weather delays. This meant the majority of the field, Wilson included, would only make one attempt at securing their spot in the race. The Briton did so without any drama, sitting 22nd overall after the first day of qualifying.

“I’m super relieved,” said the 28-year-old upon completion of a Bump Day that saw James Hinchcliffe and Pippa Mann eliminated from the event. “The last couple of nights when qualifying is looming, it can get pretty crazy on bump day. It’s definitely been on the top of my mind. I focused on having four clean laps and executing my job. I think we managed to do that and put us safely into the field. I’m just so relieved. Even though I felt like we were good coming into the day, it plays on your mind knowing that two people are going home. I’m excited to really go after it tomorrow and potentially move up there a little bit and set a good starting position for the Driven2SaveLives / Intelisys team.”

With weather not affecting any of today’s proceedings, Wilson was not as pleased with his performance given the speed shown yesterday.

“I’m honestly a bit disappointed with our qualifying run today,” said Wilson, who will be starting the iconic 500-mile race from the middle of the eighth row in 23rd. “I thought we found something overnight, and it felt like this morning when we went out the car had some speed. I was really hoping to improve on yesterday’s run and I think we ended up slower than yesterday’s run. So, I’m a bit disappointed right now, but we’ll quickly change our mindset to focus on race running tomorrow and can’t wait for the race next weekend. I’m still ecstatic to be back on track for the first time in two years and be this competitive. Sunday next week will be all about playing things smart, executing pit stops and moving forward every chance possible.”

Tomorrow sees a three-and-a-half-hour practice session followed by three full days of media advances and events as Wilson travels to his resident city of Denver, Colorado. Friday May 25th sees the Indianapolis 500 competitors take to the track again for Carb Day and one final opportunity and fine-tuning their racecars. Saturday, May 26th is Legends Day at the Indianapolis Motor Speedway, with an all-driver autograph session, public drivers meeting, followed by the Indianapolis 500 Parade in downtown Indianapolis. On Sunday May 27th, the 102nd Running of the Greatest Spectacle in Racing kicks off with coverage on ABC starting at 11am ET.