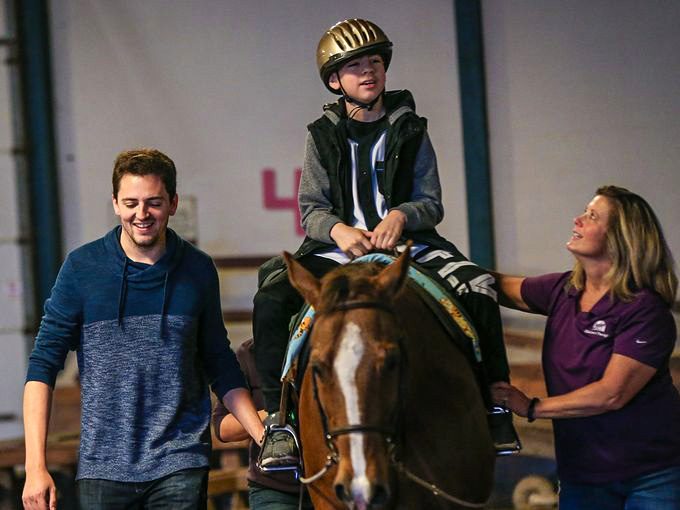 By: Maureen C. Gilmer (via Indystar)

The race helmet is too big for Yerick Colon’s head, but it can’t hide the boy’s smile. Next to him is IndyCar driver Stefan Wilson, who has just asked Yerick to be his partner in an upcoming race.

As a prelude to the Indy 500, the two will compete in the Children’s TherAplay #Horsepower 500 on May 9. It’s the second year for the event, which pairs IndyCar drivers with patients at Children’s TherAplay, a not-for-profit pediatric outpatient clinic in Carmel that serves children with special needs.

The track for this race is not at the famed Indianapolis Motor Speedway but in a horse arena. And it’s quite the spectacle, if not the Greatest Spectacle in Racing.

Drivers will compete in heats, pedaling furiously on large tricycles from one end of the arena to the other, at which point their young co-pilots will drop a photo of their team’s horse into the trike basket and stick a carrot in each driver’s mouth. Then it’s a mad race to the finish.

“Will you be my kiddo co-pilot,” Wilson asked 12-year-old Yerick, who lives in Speedway.

There’s that grin again, along with an enthusiastic “yes!”

Yerick, who has cerebral palsy and other related muscle- and movement-related disorders, has been coming to TherAplay since he was 3. During his weekly appointments, therapists integrate the movement of horses, called hippotherapy, into physical and occupational therapy sessions.

On this day, Wilson has volunteered to be Yerick’s support system on a horse named Riley. Wilson sidewalks with the horse as therapists Sue Tribolet and Lauren Copenhaver instruct the horse and Yerick on each exercise.

Yerick and other patients, some as young as 18 months old, alternate between riding backward, forward, side saddle, standing in the stirrups and with their arms outstretched in airplane mode. Each position focuses on muscle strengthening, balance and motor skills.

“These are children who will be in and out of doctors’ offices, hospitals and surgeries for their entire lives,” said Shannon Wade, marketing programs manager at Children’s TherAplay, 9919 Towne Road. “It can be frightening, painful and uncomfortable.”

When they come to TherAplay, they don’t realize how hard they’re working, she said. “They just think they’re here to have fun. Any medical treatment that can bring that much joy is just such a gift.”

Wilson, 27, got involved with the organization at the urging of a friend, NBC Sports commentator Anders Krohn, who serves on its board. The younger brother of the Justin Wilson, who died after an accident at Pocono (Pa.) Raceway in 2015, Stefan Wilson competed in his first Indy 500 last year. He is hoping to be one of 33 cars in the field this year.

“How do you qualify?” Yerick asked his new racing partner. “You go really fast, and you keep that right foot down,” Wilson said with a laugh. “And you turn left, try not to turn right (into the wall); that’s definitely important.”

But first, the #Horsepower 500, which raises awareness and money to help pay for patients’ treatments.

“For us drivers, it’s a nice event to kick back and have some fun,” Wilson said.

Naturally, a competitive streak runs through the participants. Last year, 2008 Indy 500 champ Scott Dixon pedaled to a win in the #Horsepower 500. He’s the guy to beat this year, Wilson said.

“Everyone can see what a phenomenal program this is, and being part of the event last year was such a blast,” Hinchcliffe said. “I even got firsthand experience at being the horsepower to help push Scott Dixon across the line.”

Beyond the fun, it’s for an important cause, Wilson said. “It’s just incredible the challenges the patients here face … and the amazing work the handlers do.”

He found out it’s a bit of a workout, too. During Tuesday’s visit, the Englishman good-naturedly agreed to ride a quarter horse  — sitting forward and backward. It was the first time he’d ridden since he was a young boy.

“My mum had a couple horses, and she tried to get me into them when I was 5 or 6 … but it didn’t really click.”

He swallowed his nerves in front of the kids and staff and said later he was more afraid of looking silly than of the horse itself. Yerick loved it. He walked alongside the horse with therapists while Wilson gamely did everything they asked.

Watching all the action was Yerick’s mom, Rossey Flores, who said the years of therapy have helped her son learn to stand, walk and thrive.

“Oh my goodness, he has improved so much. I’m so happy for him.”