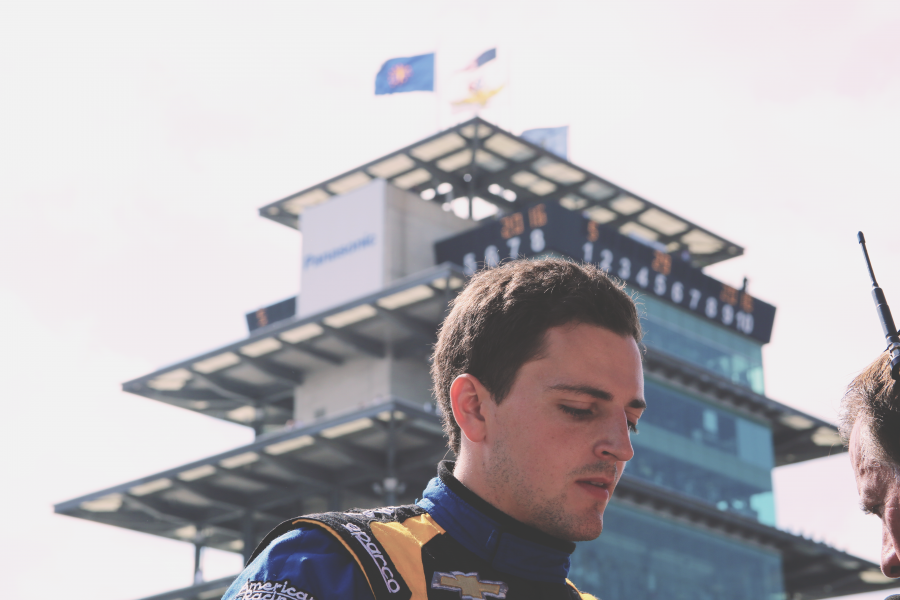 Indianapolis, Ind. – This was more than a race; it was a celebration of the past, firsts, and the future. This was Stefan Wilson’s first attempt at chasing immortality and the first of many.

Wilson’s rookie appearance at the Greatest Spectacle in Racing was the scene of his first Verizon IndyCar Series race since the Grand Prix of Baltimore in 2013, the same year his team, KV Racing Technology, won the 97th Running of the Indianapolis 500.

“It was such an honor to be one of the thirty-three drivers to take the green for the 100thRunning of the Indianapolis 500. Any year, this race is an incredible event and it’s special to be a part of, but this was an epic milestone to call my rookie Indy 500.”

The pursuit began with rookie orientation in the No. 25 Driven2SaveLives-KVRT Chevrolet and progressed through a week of practice before attempting to qualify for the 100th Running of the Indianapolis 500. The 26 year-old Indianapolis resident qualified on the outside of Row 10, with a four-lap average of 224.602 mph. From the 30th position, Wilson’s goals as a rookie were to learn from racing in the pack and managing the pressure of the Indianapolis Motor Speedway’s first sold out crowd in the history of the event.

With over 350,000 strong and millions of viewers watching around the world, Wilson stepped up to the challenge from the drop of the green-flag. In the first corner, Wilson held onto the outside line and overtook six cars going into turn 2. From there, the series rookie managed to set a consistent pace and settle in traffic in 23rd place with veteran and skilled competitors alike.

“Standing on the grid, the stage set, with the huge attendance, the anticipation for the start was immense. We had a great start, taking the high line in turns 1 & 2 and overtook 6 cars. From there we settled into a rhythm and I was really starting to focus on the end of the race, what we needed to do to improve the car in the stops, what we needed to do strategy wise, and also just learning techniques for passing at Indy.”

The first pit stop came on lap 28, receiving minor aerodynamic adjustments, new tires and a full load of ethanol fuel. Despite a brief delay in pit lane, the Briton remained on the lead lap and started making his way through the field again; setting lap times faster than full-time Verizon IndyCar Series drivers and Indianapolis 500 veterans.

After three more pit stops and successfully making his way towards a solid top 20 run, Wilson suffered a fuel leak, which caught the internal electronics on fire, forcing the Driven2SaveLives team to their pit box on lap 112. After falling behind the lead lap and recognizing further issues, the crew towed the car back to Gasoline Alley to further diagnose and resolve the mechanical issues.

“It’s been an incredible journey to get to this point, so much hard work, not just by me but by everyone involved with the program, I was determined to complete 500 miles, it’s just disappointing that we weren’t able to do that. I was accelerating for the restart and when I went to shift into 4th gear, the gearbox wouldn’t shift. We attempted to fix this issue back in the garage so we could at least gain more valuable experience and take the checkered, but unfortunately when we got back out there, the issue re-emerged. Just want to thank my crew for the effort to try and get me back out there”

On lap 165, Wilson and the team re-emerged from the garage area and attempted to collect as much experience at 2.5-mile oval and to make up enough completed laps to gain valuable positions in the 33 car field. After running another handful of laps, the issue reemerged and the Indianapolis-resident had to retire from the race.

Wilson’s early exit resulted in a 28th place finish, but the final result does not properly summarize the rookies’ month of May impact on and off track. The Driven2SaveLives program was able to generate astonishing levels of support and awareness for organ and tissue donation, and will play an important role in the future of motorsports.

“I’m so proud of the effort everyone involved with this program has put in, thank you to my management team at CoForce for helping guide me over the last 6 months, everyone at Chevrolet for giving me such a flawless engine and aero kitt all month, everyone at KV Racing Technology – they have worked their tails off to get the #Driven2SaveLives #25 out on track. Really importantly, I want to thank everyone that made it possible, Indiana Donor Network and their staff for creating such an amazing campaign in #Driven2SaveLives, Gap Guard and Dale Pelfrey for trusting me to represent their brand, and of course team owners Kevin Kalkhoven and Jimmy Vasser for believing in me and giving me this opportunity.”

“I also want to recognize some of our newest partners that we were thrilled to have on the car and on our team, Inovateus Solar one of the leading EPC’s in the country, Premiere Glass & Mirror joined me again, and also Graystone Consulting.”

“The Checkered flag hasn’t dropped on the #Driven2SaveLives campaign, we are still shooting to reach 2500 new registered members, and we will continue to try and accomplish that goal. I thought there might be a period of time between thinking about the 100th and the 101st Indianapolis 500, but I think there was maybe an hour, I learnt so much this month, and I really hope I can be back next year to put what I learnt into practice, work on that has already started!”