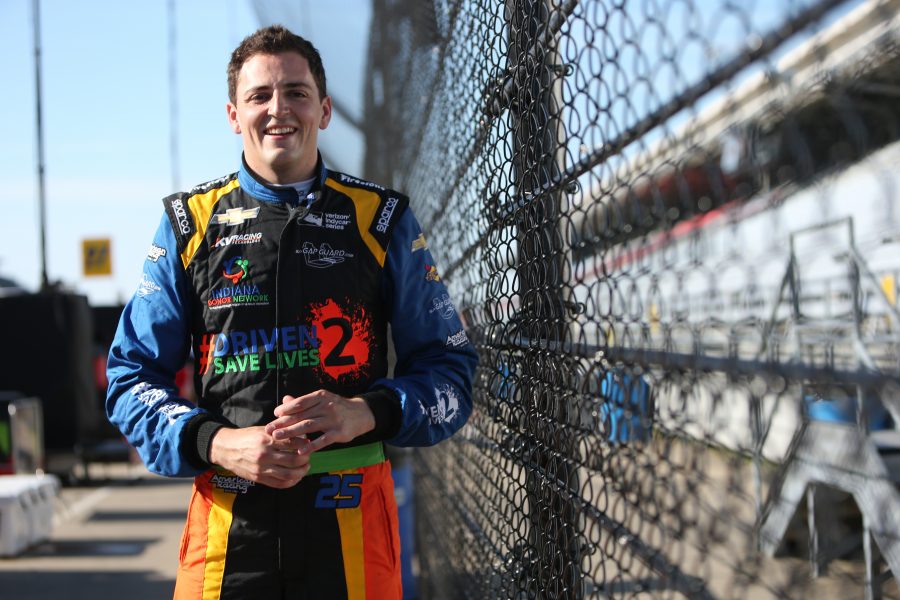 IN HIS FINAL INDY 500 COLUMN FOR MOTORSPORT.COM, STEFAN WILSON THANKS THE FANS FOR THEIR SUPPORT, LOOKS AT THE #25 KV RACING TEAM’S RACEDAY PERFORMANCE AND REVEALS HIS AMBITIONS.

I heard Tony Kanaan say something like, “The worst day of the year is the day after the Indy 500, because you know you’ve got a year to wait until you race there again.” I now understand exactly what he means. It’s a huge comedown.

And I’m going to miss the goodwill of the fans who really got behind me, showed their love for Justin, and seemed to take a real interest in our #Driven2SaveLives campaign. We fell short of adding 2500 new donors, but actually we haven’t set a deadline for the campaign so myself and the Indiana Donor Network will continue working to raise awareness and cross that finish line.

That public support became very apparent during the driver parade in downtown Indianapolis last Saturday. It was good to have Justin’s kids there, because it had been a tradition for Jane and Jess to ride with their dad in the parade so it became very important to me that they carried that on. It was also important that they were around racing again, because Justin loved it and it helped define who he was, so I’d hate for them to lose touch with the sport. It was very encouraging to hear fans shouting messages of support.

Thank you to my management team at CoForce for helping guide me over the last 6 months, everyone at Chevrolet, KV Racing Technology, Indiana Donor Network, Gap Guard and Dale Pelfrey for trusting me to represent their brand, and of course Kevin and Jimmy for believing in me and giving me this opportunity.

There were a few issues in the month that set us back a bit and the #25 team had to show determination. In the race, one such issue ended our day early, and it was crushing for the whole team who had worked so hard all month. We had a small fire in the engine bay which melted some of the electronics that control the gear mechanisms, which meant it got locked in third gear. The KV team took the car back to the garage to fix it so we could at least turn more laps, but unknown to us, the cause of the fire was a fuel leak, and once on track again it ignited and melted more of the electronics, ultimately ending our day early.

The race result wasn’t anywhere near what I was aiming for, but performance-wise I think I gave a good account of myself and showed I was competent. I didn’t put a scratch on the car, kept a cool head,  through the setbacks, and just kept on working. I think the KV guys were pleased with my feedback, too. In the first week, we just stayed close to the other guys in terms of setup, so we didn’t get lost. But by the Monday after qualifying, we had a clearer picture of what I like from a car handling-wise, and started going in that direction, so by Carb Day, what we found on the 25 ended up helping the whole team and I think we all moved forward. Obviously, if you just look at timesheets at the end of a day, you can’t really see all that, and it looks like we had an uneventful Month of May.

We had a great start to the race, I implemented another of Justin’s lessons and took the high line in turns 1 and 2 and moved up six positions by the end of the opening lap. We stayed there for the entire first stint, I worked with the tools in the car and stayed on top of the tire degradation, and was gaining on the group ahead that were positions 15-23. We lost a couple of places in the pitstops but at that point of the race I wasn’t concerned. I knew we’d all get better as the race went on; unfortunately we only completed 119 laps.

So I was pleased with our performance on raceday, I was pleased that the direction we’d gone in on Monday and Carb Day practice had proven to be right because that really made me aware of how much I’d learned and how comfortable I had become with the car. In practice, you just never know what program the other cars around you are on – you don’t know if they’re running full or empty tanks, worn or new tires, or just testing different downforce settings, etc. The real proof of where you’re at is in the race, so on that basis, our pace was encouraging. I hadn’t raced an oval for almost five years, yet I don’t think it showed.

Well I wondered how long it would take to start thinking about the 101stIndy 500, and to be honest it was right after we got back to the garage for the final time. Immediately I was wondering how I could get back here next year and capitalize on the experience gained this month. I’m also talking to the KV Racing team about other races, and maybe doing a road course test later in the year. I’m also still eligible to test as an “Indy Lights” driver for IndyCar teams that want to gain more testing time for their full season drivers.

Finally, I would like to congratulate Alexander Rossi and the Andretti-Herta Autosport. They did a brilliant job to make a tank of fuel last 36 laps in the final stint, but also for splitting the strategy between Alex and Carlos Munoz. It meant they had the field covered either way, which shows you the level of experience in that camp.

My next confirmed race is Lamborghini Super Trofeo at Watkins Glen in July. If I don’t see you there, I’ll see you around the IndyCar paddocks in the future.

Thank you for reading and for your kindness and support over the past month.