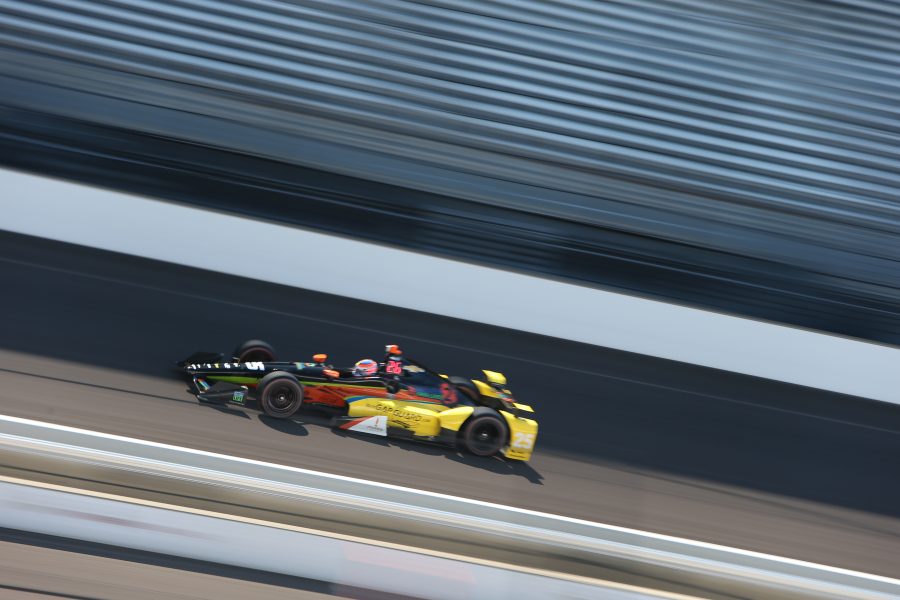 IN THE THIRD INSTALLMENT OF HIS INDY 500 DIARY, STEFAN WILSON EXPLAINS THE THRILLS AND CHILLS OF LOW-DOWNFORCE AND EXTRA BOOST, AND WHY THERE’S STILL A LOT OF WORK TO DO.

Hello again and first of all I’d like to send a thank you to all the fans, team representatives and rivals who over the past few days have come to wish me well, offer support – and, after qualifying, congratulate me. There’s been a lot of kindness shown to me that demonstrates why I made Indianapolis my home, and has also been a constant reminder of how well-loved Justin was.

I’d also like to thank Jimmy Vasser and Kevin Kalkhoven for the opportunity, and to congratulate them on building a fantastic team. KV Racing has done a great job of working with me and also working hard on the #Driven2SaveLives Chevrolet to iron out some of our handling bugs that have affected myself, Matt [Brabham] and Seb [Bourdais]. I’ve learned so much over the past seven days, it’s been like cramming in my revision before the biggest exam of my life.

We’ve been plagued by understeer most of the week, and switching to low downforce settings and qualifying boost on Fast Friday made the issue worse, but also made the car faster and less forgiving, as you’d expect. Both Matt and myself had huge moments on Friday – Matt at Turn 1 and myself at Turn 3. We both saved it, but it was certainly eye-opening as to how quickly you can get caught out around here at these speeds. Even the Indy veterans have had some alarming moments.

Our one came after trying a setup change to cure the understeer, so we backpedaled on that. When we’re on low downforce levels, we didn’t want to keep making stabs at setups in case it causes the car to do something unexpected at a time when you don’t have the aero grip to help you save it. For us, we thought the smartest thing to do was to make the changes while in race trim, where the cars a bit more forgiving.

So while we were on low downforce, we stopped experimenting and just thought, OK, let’s get it in the show, and just make a list of things to try on Monday with race downforce levels. Unfortunately, that list of things to try today is now quite long; I’m not sure we have time try them all in the three-and-a-half hour session, so I suspect we’ll still be experimenting again on Carb Day [Friday] in that final one-hour before Sunday’s race.

I’ve got to say, the extra turbo boost from Friday through Sunday was great fun. You have this awesome feeling of the Chevy just pulling and pulling down the straights, and suddenly you look down as you’re heading into Turn 1 or Turn 3 and your readout shows you’re doing close to 240mph. The teams have to fit a different stack of gears to take advantage of the extra horsepower.

At that point, you’re also altering the lines you take around the track, but that’s more a result of the low downforce rather than the extra power; you’re stuck on a slightly higher line to keep the radius of the corner smooth. You can’t pinch down because sudden movements will send the tail out.

We increased downforce a little bit for qualifying on Sunday, because during our Saturday run, I had to lift on the third lap because I lost the front end, and it’s hard to get your momentum back after you do that. So with that little bit of extra cautionary downforce, it was a bit easier to be flat all the way around come Sunday.

It still wasn’t easy though, and I was reminded of that because we were second car in line for qualifying after Alex Tagliani had his crash exiting Turn 4. He’s a former polesitter at Indy, so if he can be caught out, then the rookies need to learn from that. It didn’t spook me but it did make me think, ‘Hmm, we worked so hard to get to this point and we don’t have a spare car. If I crash I’ll still be in the show because there are only 33 cars here…but I’ll be giving my crew a whole bunch of extra work and it will cost me in terms of track time tomorrow. Let’s play it smart.’

Plus, I think crashing makes it harder for you the next time you want to race here; if you’re looking for another ride, teams will look at you sideways and maybe decide that hiring you could cost the teams in terms of crash damage. You just don’t want to have that reputation.

So it’s going to be busy today as we try all these different setup changes, because we have to make them one by one so we know which ones improve the car and which ones don’t. Plus we have to be on track at times when we have clean air so we can evaluate the change properly – but then also we need to see how that change works in traffic.

I would also like to point out that I have some very special supporters – Julia, Justin’s wife, and their daughters Jane and Jess came to watch me this week. I’m sure it’s hard for them, they have so many great memories of being here with Justin, and like me, when you walk around IMS it’s hard for those memories not to come flooding back. They are enjoying being here though, I even let them sit in my #Driven2SaveLives-Chevy last night which they were really excited about, so it looks like we may need to visit Sarah Fisher’s karting facility this week while they’re in town.…

OK, lots to do to do today, so I better sign off now. Again, thank you for all your support so far. The fans at IMS this month have been incredible.

Thanks for reading, I’ll get back to you soon.