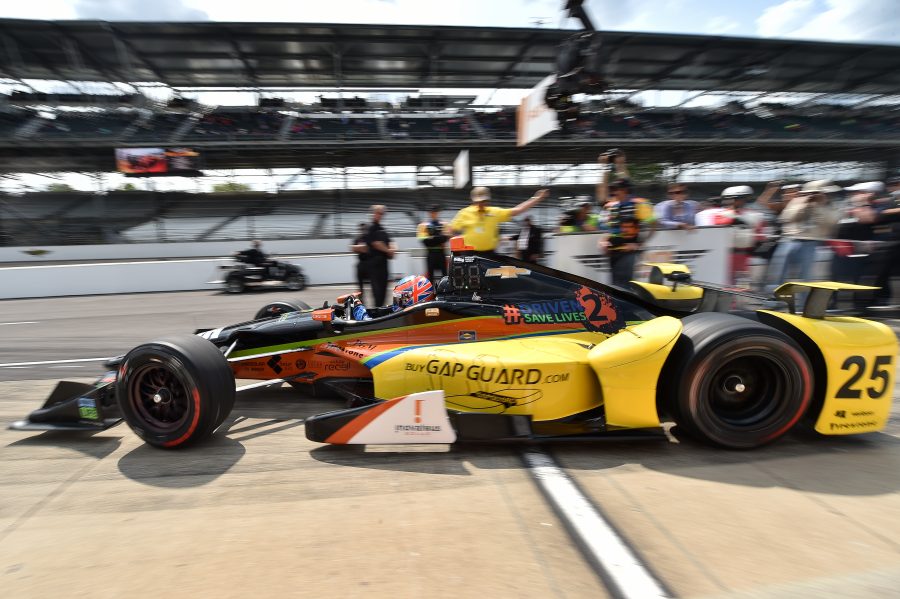 We’ve started practice for the 100th Indianapolis 500, and it feels good! But honestly, just the feeling of going around the Speedway at 220mph-plus in the #Driven2SaveLives KV Racing Chevrolet is amazing. I loved it.

Rookie Orientation had an interesting start as we were a little bit late getting to pitlane, but the team had a lot of work to do. With the GP Indy weekend thrown in there, then getting two cars – Sebastien Bourdais’ and Matt Brabham’s – switched over to oval spec, get my car finished… Those KV guys have been working their tails off. My car only came out of the paintshop last Thursday, and it was bare tub and dismantled.

Then there were a couple of issues that needed to be addressed, so by the time we rolled into pitlane, the other rookies had passed Phase 1 of ROP. That meant when we hit the track, everyone around us was going a bit quicker because we had to do our 10 laps between 205 and 210mph.

How much quicker did it feel than the IndyCar two-seater? A LOT quicker! The lines you take are all pretty similar, but what really stood out was how quickly you cover a certain amount of ground. You get used to a certain speed of going from up by the wall, down to the apex and then exit up by the wall again. In an IndyCar, at first I couldn’t believe how quick that turn-in felt – and that was still while we were at Phase 1.

And then there was the math refresher course I had to do while in the car. You have to focus hard to stay between 205 and 210mph for 10 laps, and then in Phase 2, between 210 and 215 for 15 laps. You’ve only got your current speed on the dashboard, not a predictive lap speed. So all the way around you’re thinking, ‘OK, I’m doing X speed now, I scrubbed off Y amount in the corners, now I need to get back up to X speed which should give me Z speed laptime-wise.

The result is that you’re lifting off or accelerating at places on the track where you’d normally be constant throttle. Adding to this conundrum is that we had a strong headwind down the front straight which gave us a strong tailwind down the back straight. So I was up to 224 down the back straight, thinking, “Oh crap, that’s way too much”, backing it down and lifting off the throttle through Turn 3, and then because of the headwind and the scrubbing off speed in the corners, it was too easy to come onto the front stretch below the speed I needed to be.

So it was a constant juggle through those first couple of phases and it was a relief when they were done. But actually, looking back now, although it is a challenge to stick within the speed parameters, it is a good way to get rookies up to speed. I did 41 laps, and then when everyone was released together for practice, I was ready to get up to the car’s true speed and we got through Phase 3 no problem. I was pleased with how easy it was to do that and it wasn’t long before I was flat all the way around and we turned 38 more laps.

And at that point, you can really start giving your race engineer some meaningful feedback. We had too much push in the car yesterday so we need to free it up a little bit and we have some good ideas. It’s useful because the feedback between all three KV cars is the same so we can all try different things and pick out the best one.

So now I’m just chomping at the bit to get back out there. I was disappointed not to turn laps today because of the rainout, but we kept busy by going through data from yesterday and looking at possible setup changes to try later in the week.

It’s a great feeling to get to that stage. Honestly, yesterday as I got in the car, I was thinking, “Holy cow, I’m finally about to do it! This is the culmination of chasing down sponsors and partners for a year or more, the culmination of many thoughts and emotions and discussions since Justin passed away… and now here it is. It’s all down to me!”

But once I got out of the car, I was thinking, “OK, now I know what it’s like. I don’t have to imagine it any more. No secrets.” And that feeling just gives you so much confidence.

On another note, I’m also very proud to present my new helmet. The design combines mine and Justin’s colorschemes, and it’s painted by Corby Concepts here in Carmel, Indiana, the same company that used to paint Justin’s lid. We’ve deliberately designed it so that the ‘Justin side’ is the one that faces the majority of the crowd on the outside of the track. And of course we’ve retained the Dan Wheldon logo on the back to honor another fallen IndyCar hero and a two-time winner of the Indy 500.

Well, thanks again for reading and I’ll give you more updates soon. The weather’s looking OK for tomorrow, so my hopes are high.