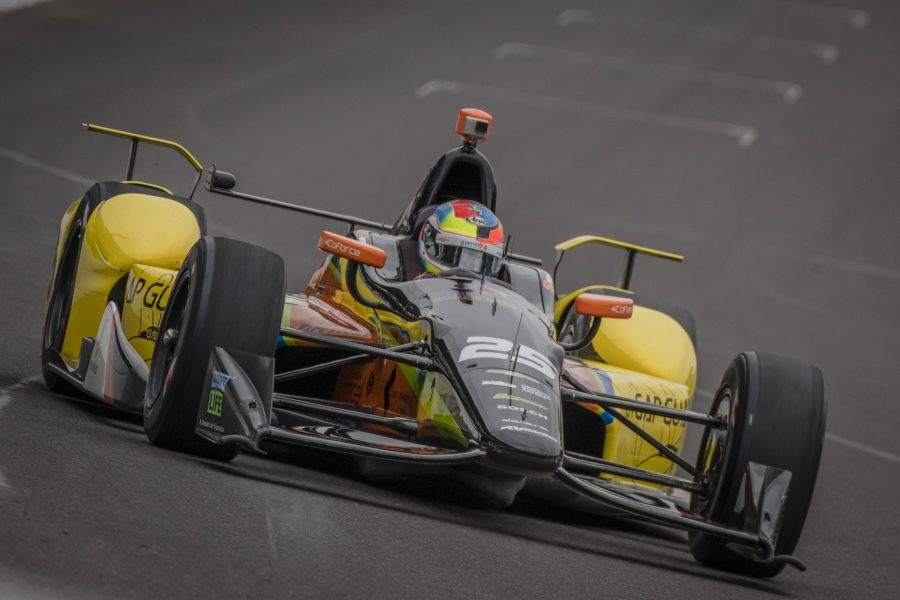 ON THE EVE OF HIS ROOKIE ORIENTATION PROGRAM FOR THE INDY 500, MOTORSPORT.COM COLUMNIST STEFAN WILSON EXPLAINS THE SYSTEM, THE ANTICIPATION, AND THE SIGNIFICANCE OF THE NEXT TWO WEEKS FOR THE WHOLE WILSON FAMILY.

Hello and thank you to everyone who has made this opportunity possible for me. I wouldn’t have been here without the support of Indiana Donor Network and Gap Guard as my primary sponsors, and also my associate sponsors Inovateus Solar and Premier Glass & Mirror.

As a lot of you will be aware, when my brother Justin passed away last August, the decision he had made years before to register as an organ donor saved five lives. Justin got to do a lot of great things in his career – winning the Formula 3000 Championship, achieving his dreams of competing in Formula 1 and the Indianapolis 500, and winning 7 Indy car races. But he was able to match the significance of all those achievements with his final act.

There are five people walking around today that wouldn’t be able to do so without Justin being the Justin that we all knew – the guy who would stop to take a picture with fans, or after a long day would take time to sign autographs. That’s who Justin was – always considerate of others. I called Justin my hero even before that, but now… I don’t know, it’s just elevated the meaning of that word! Who wouldn’t take inspiration from a guy like that?

Before last August, I didn’t know anything about organ donation. I didn’t even know Justin was a registered organ donor and, quite frankly, I wish I’d never had to find out, as that would mean Justin was still with us.

From the beginning of last year I was already working toward trying to enter the 100th Running of the Indianapolis 500. In the weeks and months that followed last August, though, I had to ask myself some difficult questions. I had seen firsthand how dangerous this sport can be. Do I accept the risk still? Is my family and my now wife OK with me doing this? And so on. I think you can imagine the dilemma.

The first question was easy to answer: this sport is what made Justin the Justin we loved. It completed him and my passion for this sport far outweighed any fear that I might have had. The second was obviously a little tougher, but my parents are incredible, they raised an amazing son in Justin, and I hope I fit into the same category also. Their support meant a great deal to me, and my wife and Julia [Justin’s widow] have also been very supportive.

As I mentioned, last year I was already working on putting a program together for Indy, but after losing Justin, I found this whole new level of determination. I thought I was working hard before, but it kind of became an obsession and so myself and Coforce, a group helping me, put in some long hours. Even on my honeymoon I spent the week writing emails and making calls to team owners and potential sponsors. I had to be in this race. I just wanted to be able to tell Justin that I made it into the Indianapolis 500 and would try to do him proud on raceday.

The work continued with many more months of calls and emails, and I have to thank one of my main sponsors Dale Pelfrey and his company Gap Guard for stepping up to support my efforts. I also owe a huge thank you to KV Racing Technology team owners Kevin Kalkhoven and Jimmy Vasser. It’s safe to say they are going to be high up my Christmas Card list forever, because they and Chevrolet have put their faith in me. Having the support of a former IndyCar champion like Jimmy is a big deal when you have only one previous IndyCar start to your name.

So when Indiana Donor Network approached me in February with the idea of running a campaign to honor Justin and continue his legacy of saving lives, #Driven2SaveLives was born. I was determined to carry on Justin’s work and publicize something he clearly felt pretty strongly about. We’re aiming to raise awareness of the merits of organ donation and sign on 2500 new people by the end of the month. Please check out my video herehttp://driven2savelives.org .

It would have been easy for Mom and Dad to not be supportive of what I’m doing. I mean, my God, we lost Justin. But in fact they’ve really been great. Obviously Mom still has a hard time but she knows how much this means to me and has given her blessing. I think what maybe helps is that she knows that Justin would have approved of it! He really wanted us to be on the grid together for the 100th Running of the Indy 500.

I don’t like to use the words “Justin would want…” too often, as I know the overriding thing Justin would want is more time with Julia and their daughters Jane and Jess. But I do know that Justin wouldn’t have wanted to let what happened to him affect how I chose to pursue my career goals, so I think Mom sees it that way too.

My Dad, like me, is sad that his sons didn’t get the chance to race at Indy together – he loved that we got the chance to get one race as teammates back at Baltimore in 2013. We spent some time together as a family down in Florida in March, and although it wasn’t really a vacation for me because I was on the phone all the time trying to put this deal together, Dad was the one checking up all the time – How’s it going? What’s the deal? Is it happening? And so he was really pleased to see it eventually all work out.

Julia will be here in Indy from next weekend with Jane and Jessica. That’s going to be special, especially keeping up the tradition of them going on the Driver Parade in downtown Indy on the Saturday. They love that, and it’s tragic they have to do it with Uncle Stef this year instead of their Dad, but I hope they can still enjoy it.

The Indy 500 Rookie Orientation Program has been going for decades, with drivers having to complete a certain number of laps at certain speeds before being let loose to run with the Indy car regulars. It’s an Indy tradition and, I think, a very good and smart tradition.

The format this year is that over two hours tomorrow, from noon to 2pm, we have to complete 10 laps above 210mph, and then 15 laps over 215. And once we pass phases 1 and 2, we’re cleared to actually run with everyone else, during which we do phase 3, which is 15 laps above 220mph.

During phases 1 and 2, as far as I’m aware, all five rookies can be out there at the same time. This year it’s Matt Brabham, Alexander Rossi, Max Chilton, Spencer Pigot and myself. There are a couple of guys doing refreshers as well.

We’ll start off pretty conservative by bolting a bunch of downforce on the car, and then as the week goes on and I get comfortable, we’ll start taking it away to get faster. But with Tuesday and Wednesday possibly being hit by rain, we really want to put a lot of miles under our wheels tomorrow once ROP is out of the way.

NO SUBSTITUTE FOR THE REAL THING

I was with the team today, and after having my seat fitting earlier in the week, today was about doing final fits, checking pedal locations, padding, safety-belts. And it was fine; everything felt really good.

I’m 6’4” and the Dallara DW12 has plenty of room for me. I mean, I wouldn’t want to be any taller but this IndyCar definitely has more room than the previous-generation Indy Lights cars [in which Stef finished third in the championship in 2011 – Ed.].

For myself, the preparation has involved chatting to my engineer Zack Eakin, talking through my game-plan for the week and then watching videos, looking through my own notes from when I raced here in Indy Lights, and watching previous years’ races. That’s about as much as you can do, really.

I’ve also been racing on sim software, but that’s pretty limited and it isn’t a substitute for the real thing. The one way it can help is preparing you for the visuals regarding turn-in points and so on. But to be honest, I’ve driven so many laps driving passengers in the IndyCar two-seater around Indianapolis Motor Speedway that I know where I need to place the car. OK, I’m probably only averaging 175mph in that, but the lines you take are pretty similar. It just becomes a bit more critical to hit your marks when you’re doing an extra 50mph!

I know I’m going to feel a lot more comfortable once ROP and the rest of the first day is out of the way. So I’m really trying only to look one day ahead at the moment, because I don’t want to lose focus on our target for each day. But I’ll report back to you all tomorrow and let you know how it went.

Thank you all for reading this and for your support while I’ve been trying to break back into IndyCar. Also, thank you for your messages of hope and inspiration since Justin passed. It’s been comforting to realize how much everyone appreciated what a great person and a great driver he was. The tributes and comments I’ve seen and read since that terrible day last August have been really amazing.

Check back here tomorrow evening for an update.