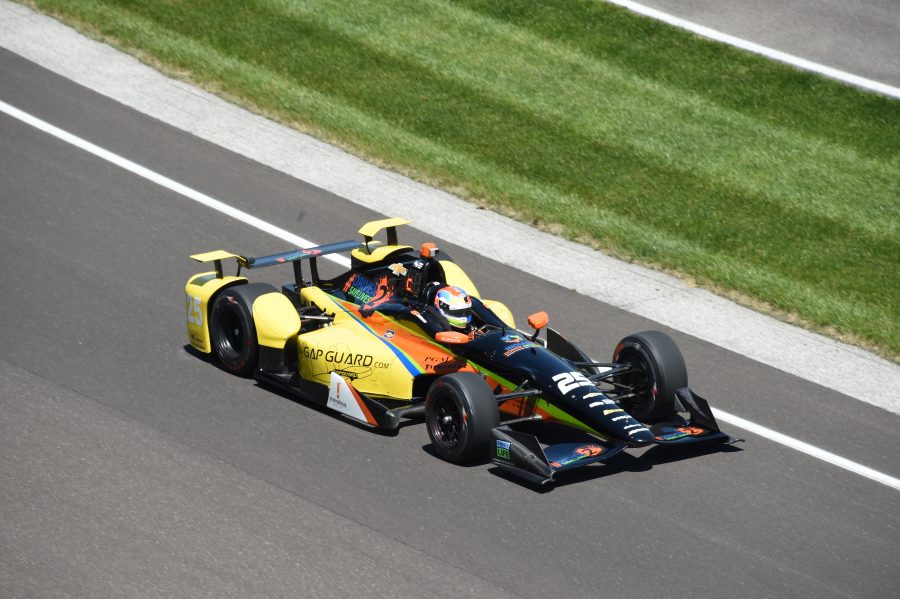 INDIANAPOLIS, IN. – IndyCar driver Stefan Wilson announced today that he will enter in the 100th Running of The Indianapolis 500 presented by PennGrade Motor Oil with 2013 winners KV Racing Technology. The 26-year old Briton is able to fulfill his dream of competing in the world’s largest one-day sporting event thanks to Indiana Donor Network and Gap Guard.

“Like so many other drivers, I grew up dreaming about the Indianapolis 500 and it’s all I’ve worked toward for the past few years. Justin raced in the 500 eight times and it was a dream to join him on the starting grid and race against him. I just never anticipated a situation where Justin wouldn’t be there with me,” said Stefan, a U.K. native who now calls Indianapolis home.

Wilson is no stranger to the Indianapolis Motor Speedway. He competed in the Indy Lights Freedom 100 in 2010 and 2011 with a highest finish of fourth in 2011 with Andretti Autosport.

Wilson is the younger brother of the late Justin Wilson, who won multiple races throughout his ten-year career at the top level of American open-wheel racing. Justin died in August 2015 from injuries he sustained in a race crash at Pocono Raceway in Pennsylvania. He had previously registered his decision to become an organ donor and as a result, he saved five lives. Stefan will look to honor his brother and compete in The Greatest Spectacle in Racing in the No. 25 Driven2SaveLives-KVRT Chevrolet/Dallara/Firestone.

“Justin’s decision to be an organ donor ended up being the one shining light out of that dark, terrible time after Pocono,” said Stefan. “I’m grateful to Indiana Donor Network and KV Racing Technology for the opportunity to fulfill a racing dream and to honor Justin’s legacy on such a monumental stage as the 100th running of the Indianapolis 500.”

Indiana Donor Network is Wilson’s primary partner for his rookie run. Indiana Donor Network, one of 58 designated organ recovery organizations in the U.S., oversees and coordinates organ, tissue and eye donation, and provides public education on donation and transplantation across the state.

Together, Wilson and Indiana Donor Network have launched a campaign called Driven2SaveLives to promote organ, tissue and eye donation and transplantation around the Indianapolis 500. The hope is to get 2,500 people across the country to register their decision to donate through Driven2SaveLives.

“Stefan’s story really personifies our mission at Indiana Donor Network,” said Kellie Hanner, president and chief executive officer at Indiana Donor Network. “His experience with Justin’s organ donation illustrates firsthand what it means to save and enhance lives. We couldn’t ask for a better champion and we hope Driven2SaveLives inspires others to become registered donors like the Wilson brothers.”

Donning the side of Wilson’sChevrolet powered machine will be Gap Guard, a foam device used in personal and commercial vehicles, which prevents items from falling between the seat and the center console.

“’I’ve been in many Indy 500’s as a team owner, partner and sponsor, but to be in the 100th Running of the greatest spectacle in racing as a co-primary sponsor just has a nice ring to it,” said Dale Pelfrey, president and CEO of Gap Guard. “I’m so happy to team up with Stefan, KV Racing Technology and Chevrolet, and have a distinct feeling they’ll be a very strong package. We want to create awareness for Gap Guard through the alliance with Stefan, and we feel it is a perfect fit. Memorial Day weekend should be a great one.”

“I’ve known Dale (Pelfrey) for a few years now and I’ve been involved with his Road To Indy teams in that time. He has a huge passion for racing and the Indianapolis 500, and over the years he’s backed a lot of great drivers at Indy, so to have his support and to be able to represent his companies means a great deal to me,” Stefan said.

“Gap Guard is such an ingenious product, I used to always drop things down the gap between the seat and center console in my car. I never even thought about a solution, and then Dale showed me Gap Guard, and I’ve had a set in every car ever since.”

Wilson will be competing for KV Racing Technology this May with teammates Sebastien Bourdais and Matthew Brabham. Team owner Jimmy Vasser and team manager Steven Moore are excited to give Stefan his second opportunity at competing in the Verizon IndyCar Series.

“We are pleased to announce that Stefan – a talented driver and an outstanding young man – will be driving for KV Racing Technology,” said Kevin Kalkhoven, co-owner of KV Racing Technology. “Stefan has raced at the Indianapolis Motor Speedway before with Indy Lights but this will be his first INDYCAR race there and we look forward to having him on our team for the 100th running of the Indianapolis 500.”

“Having spoken with Stefan throughout the winter about this project, I am very pleased to see it come to fruition,” said Jimmy Vasser, co-owner of KV Racing Technology. “Not only has Stefan proven to be a fast driver but he brings the complete package to the table. It also goes without saying that it will warm the hearts of everyone in the racing community to see him drive the No. 25.”

Wilson must pass all stages of the Rookie Orientation Program set for May 16th at the Indianapolis Motor Speedway in order to Qualify for the race. The 100th Running of The Indianapolis 500 takes place on Sunday, May 29 at 12:00 p.m. (ET).

About Indiana Donor Network
Indiana Donor Network is one of 58 designated organ recovery organizations in the United States and coordinates organ, tissue and eye donation throughout the state. Indiana Donor Network is devoted to public education about donation and transplantation with the goal of saving and enhancing more lives. For more information about Indiana Donor Network or to register your decision to become a donor, visit IndianaDonorNetwork.org.
About Gap Guard
Gap Guard is a simple automotive accessory to save you from life’s little distractions. We’ve all been there. We drop our keys, our phone, our money and even some french fries as we eat in our cars and trucks. We all have busy schedules and this simple device keeps us focused on driving instead of looking for things that fall under the seat. Don’t chance it! Keep your eyes on the road with Gap Guard! Contact your local automotive dealership to get Gap Guard today.
About KV Racing Technology
KV Racing Technology was founded in January 2003. The Indianapolis based team is owned by successful venture capitalist Kevin Kalkhoven and 1996 IndyCar champion Jimmy Vasser. General Manager Steve Moore oversees the team’s operations and is assisted by Team Manager Chris Mower, Engineer OlivierBoisson and Crew Chief GregSenerius.