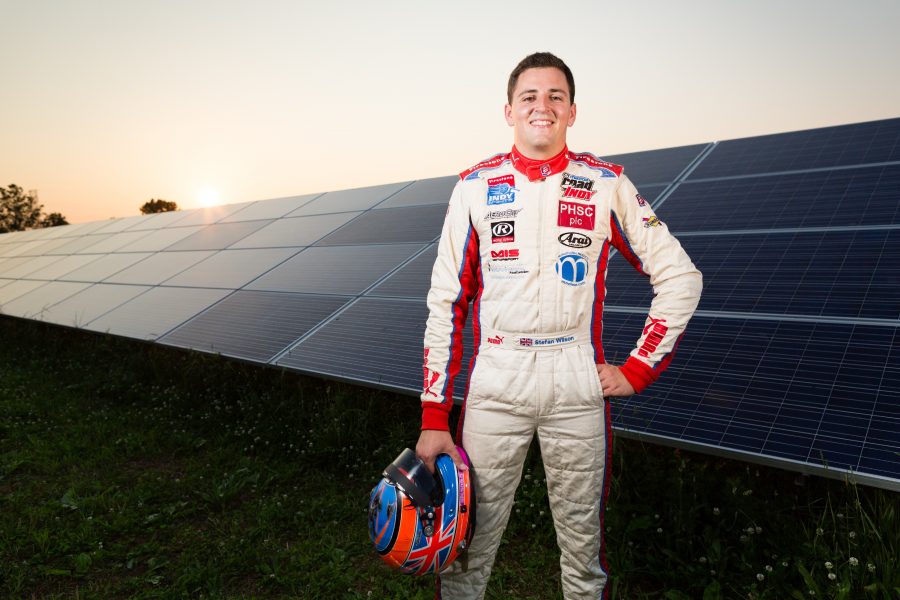 Indianapolis, IN (January 28, 2016) — IndyCar driver Stefan Wilson and the #ThinkSolar campaign team today announced a sponsorship by the American Solar Energy Society(ASES) for Wilson’s 2016 Indianapolis 500 bid to be the first IndyCar driver with a solar-powered pit crew at the 100th Running of the Indy 500 in May. Wilson aims to realize a dream of following his late brother Justin Wilson’s path to the Indy 500 by merging the worlds of motorsports and solar energy through #ThinkSolar. ASES and Wilson share the common goal of moving solar forward, faster.

ASES is the nation’s leading association of solar professionals and advocates. For 61 years, ASES has provided leadership in the renewable energy sector hosting important annual events such as the ASES National Solar Tour and ASES National Solar Conference, and also publishes the award-winning Solar Today publication. Alignment with Wilson’s #ThinkSolar campaign represents an interesting collaboration for the organization in bringing the solar, renewable energy and IndyCar industries together.

The ASES mission to “inspire an era of energy innovation and speed the transition to a sustainable energy economy” aligns well with Wilson’s #ThinkSolar objectives. Among these are connecting race teams, track and sanctioning body officials with solar companies that can design and engineer solar systems to power practical needs in the sport such as charging stations, lights, other electronic assets, beginning with his own.

“This endorsement by ASES is a really exciting development and validation of the #ThinkSolar campaign’s vision,” said Wilson. “They’ve helped shape an industry that’s committed to solving many of the energy challenges we face today. Together, we’ll strive to invigorate conversations around commonplace solar applications as well as the design and engineering innovations that will drive the future of renewable energy for this sport and the world.”

ASES Executive Director Carly Rixham is equally excited about the partnership. “We think Stefan’s #ThinkSolar campaign is a great way to get solar in front of people in a new way. There is already some solar in the racecar industry. In fact, the Indianapolis Motor Speedway has a 9 MW solar farm nearby with 39,312 solar panels. Now, bringing solar onto the track will increase the visibility of the technology with a diverse audience. It’s an honor to support Stefan and his earnest interest to reduce environmental impact.”

#ThinkSolar is currently working with additional partner companies to allow Wilson to compete in the 100th Running of the Indianapolis 500, just a few short months away. Companies interested in supporting an acceleration in solar powering our lives both on and off the track should contact pr@stefanwilson.co.

About ASES
Established in 1954, the nonprofit American Solar Energy Society (ASES) is the nation’s leading association of solar professionals and advocates, and is the U.S. Section of the International Solar Energy Society (ISES). We are dedicated to inspiring an era of energy innovation and speeding the transition toward a sustainable energy economy.

For more information, please contact us at info@ases.org or visit www.ases.org.

About Stefan Wilson
An accomplished professional race car driver, Stefan Wilson is the younger brother of the late IndyCar star Justin Wilson, and began his career at age nine competing in UK and International Karting events. Graduating to open wheel cars in 2007, an impressive first season in the Formula Palmer Audi Series saw him nominated and later named the Winner of the Prestigious McLaren Autosport BRDC Award. This achievement led to a test with the Vodafone McLaren Mercedes Formula 1 team in 2009.

Upon switching to American open wheel racing, Wilson competed in several Indy Lights seasons from 2009-2012, scoring multiple race wins for Andretti Autosport, and 2 Lap Records in the series. In 2011, he finished 3rd in the Championship with two race wins. In 2013, he competed in one IndyCar series race, and teamed up with brother Justin Wilson at the Dale Coyne Racing team. Despite a lack of testing and a six-month absence from the race seat prior to the Baltimore event, he brought the car home in 16th ahead of some very reputable IndyCar drivers.

Today, Wilson’s focus is on bringing solar technology to the 100th Running of the Indy 500, with ambitions to become the first solar-equipped racing team in the sport.