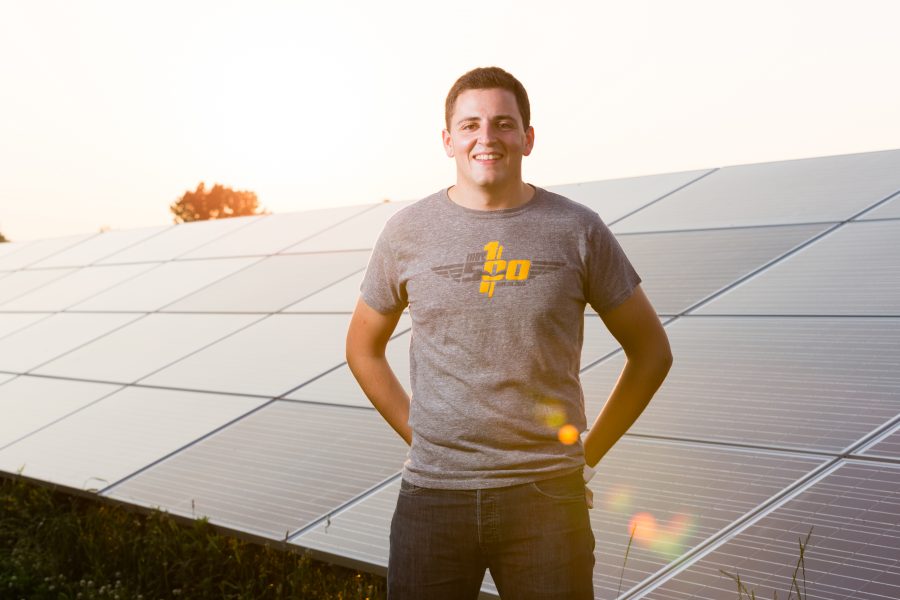 INDIANAPOLIS (Oct. 8, 2015) – Professional race car driver Stefan Wilson is merging the exciting worlds of motorsports and solar energy through his Think Solar campaign, with the goal of introducing motorsports and local communities to the practical ways solar energy can reduce costs and help power the future.

Wilson, 26, from Sheffield, England, hopes to provide the Think Solar campaign with massive exposure by racing in a historic event in motorsports, the 100th Indianapolis 500-Mile Race, in May 2016. The most prestigious race in the world takes place in front of more than 250,000 fans atIndianapolis Motor Speedway and a global television audience of millions, as it’s the largest single-day sporting event on Earth.
The talented Wilson is a veteran of international open-wheel competition, scoring multiple victories in Formula Palmer Audi, British Formula 3 and Indy Lights. He also earned the prestigious McLaren Autosport BRDC Award as the most promising young British driver in 2007 and completed a test with the McLaren Formula One team in 2009.
Making his first Indianapolis 500 start on such a noteworthy year for “The Greatest Spectacle in Racing” also would fulfill a dream that Wilson shared with his older brother, Indianapolis 500 veteran Justin Wilson, who tragically lost his life in a racing accident in August 2015.
“Justin and I shared a special bond through our passion for motorsports our entire lives,” Stefan Wilson said. “He always was the biggest supporter of my goal of joining him in the starting lineup for the ‘500,’ and I’m committed to honoring his memory by fulfilling that dream while promoting the practical benefits of solar energy at the Speedway and in our communities, another idea he supported.”
Motorsports provides an effective, exciting platform for solar energy. Racing teams always have been at the cutting edge of developing new technologies. Teams can use solar energy systems for essential equipment such as providing power for pit stands, where engineering computers are used for vital car monitoring, diagnostics and car setup changes. Solar panels also can be used to recharge team radios and to power generators used in team garages and hospitality areas.
These devices currently are connected to a power grid at the racetrack, supplied by local power plants that burn fossil fuels to generate electricity.
Wilson will institute change by connecting race teams and racetrack and sanctioning body officials with companies that can build solar panels for many practical motorsports power needs, such as charging stations, lights and as many other electronic assets as possible. The use of panels will help cut emissions, lower the use of fossil fuels and trim non-renewable energy use in a sport that historically has done the opposite.
“The solar industry has made great strides in the U.S.,” Wilson said. “The Think Solar campaign will place solar power in a global spotlight through the 100thIndianapolis 500 and show how small, reasonable steps can create significant savings and environmental benefits for every homeowner.”
The benefits of solar energy as an alternative energy source are clear and numerous. The sun produces unlimited amounts of energy with no emissions. The development of cost-effective solar panels has made it possible to harness the sun’s energy to power a multitude of buildings and electric devices.
There are more than 20,000 megawatts of cumulative solar electric capacity operating in the United States, enough to power more than 4 million average American homes, according to the Solar Energy Industries Association (SEIA).
Solar energy continues to grow in popularity as a practical, cost-effective energy source. Nearly 7,000 megawatts of solar electric capacity were installed in the United States in 2014, a 34 percent increase over 2013, according to the SEIA. Thirty-two percent all new electricity-generating capacity was solar in the U.S. in 2014 – second only to natural gas. That growth is expected to continue, with an additional 20,000 megawatts of solar capacity projected over the next two years.
The cost of solar installations for homeowners also has dropped by more than 73 percent since 2006.
Wilson thinks that cost-effective growth is just the beginning, and he is committed to solar energy’s role in a cleaner, more energy-efficient future.
“I like to joke that solar has a bright future,” Wilson said. “I believe the greatest asset for solar power is its scalability. Nearly everyone has a rooftop, so there’s the ability to start creating energy at the very site of where we’re using it the most. Understanding other applications for solar energy means we can continue to transform the way energy is produced and consumed. Combined with better energy storage solutions, solar’s growth will be exponential, and it can’t come soon enough.

“I see this campaign as being an exploratory test for solar in motorsports. The plan is to implement solar within the race team in unique ways. While solar won’t be driving the car, it will be driving the team and the applications will be critical to the operation. If successful, I hope we can influence small change and solar adoption throughout the motorsport world.”

While his immediate focus is on the 100th Indianapolis 500, Wilson also hopes to bring his Think Solar campaign program to other forms of motorsports. Sports car racing already has proven to be fertile ground for “green” power, with many top manufacturers using ultra-efficient hybrid engines and alternative fuels.
Wilson also hopes to combine his racing efforts with STEM (science, technology, engineering, math) education initiatives to inspire students to learn about the benefits of solar and to explore careers including solar design, engineering and architecture.
“I believe the key to advancing solar is education,” Wilson said. “By showcasing the benefits and advantages, we can inspire the next generation. The potential for what they may achieve with solar is limitless.”