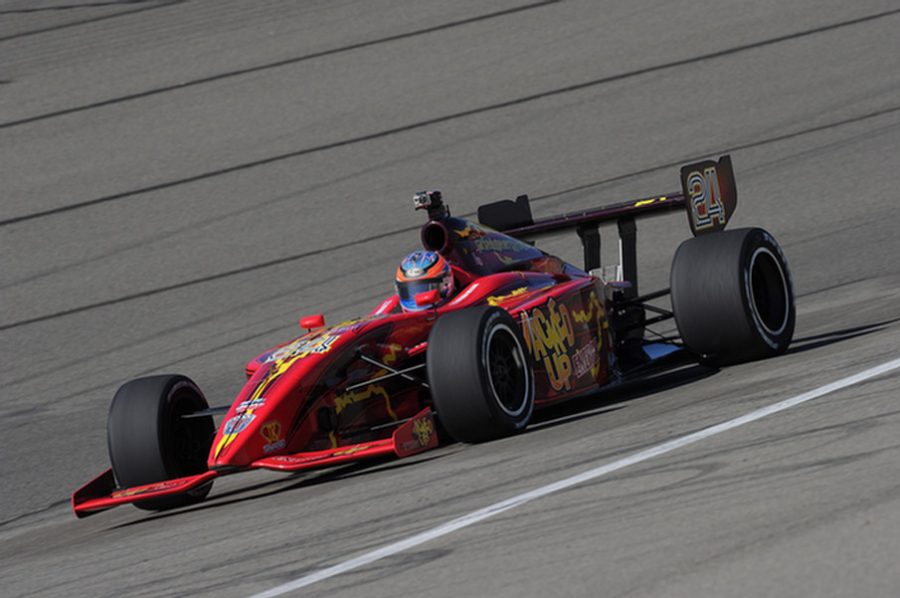 Unfortunately, the new year brought a new car for IndyCar, and the increased budgets made it difficult for teams to field multiple cars. Wilson attempted to put deals together for the 2012 season, but nothing materialized in time.

“I was in a tough position because after finishing third in Indy Lights I was caught between IndyCar and Indy Lights,” Wilson said. “There were new cars in IndyCar, and that made it hard for teams to fill the field due to the added expense. I was chasing drives all year, and nothing seemed to materialize.”

Wilson’s previous year in Indy Lights did not go unnoticed by teams. His talent attracted the attention of many team owners. When a sponsorship deal developed for Indy Lights team Fan Force United for the oval race at Fontana, they immediately called Wilson. They were sure he would yield the results their sponsor, energy drink Jacked Up, sought.

“Toward the end of the season, Fan Force United asked me to drive their car at Fontana,” Wilson said. “They had raced most of the year but then had missed a few races during the second half. Thanks to a team sponsor, they were able to pick who they wanted to be in the car.

“It was nice to be considered and chosen. The team recognized my talent. I knew it was going to be tough to go up against the big teams who had raced all year. They had a smaller budget compared to other teams and less tools.”

Wilson and the team had to play catch-up to the rest of the Lights field, constantly making adjustments to the setup that had not seen race action in more than a month.

“The practice sessions were focused on getting the car right for the race, a car that was good in traffic and good on track,” Wilson said. “I think we started 13th, because again we focused on the race setup and not qualifying set up. We ended up finishing sixth, so that was a huge success for the team.

“Taking that car, mixing it up with the big teams during the race was really special. I built a great relationship with that team and enjoyed working alongside them.

It was such a fun race because we got to take the car from behind to the front.”

The one-off race also gave Wilson the opportunity to work with a racing legend, Tim Wardrop. He was known for being one of the most skilled engineers in open-wheel racing. This would be one of the last cars Wardrop engineered before his untimely death.

“It was really cool to work with Tim Wardrop, their engineer at the time,” Wilson said. “He has a lot of experience in IndyCar and at the Indianapolis Motor Speedway. He actually passed away that winter, so it was an honor to drive for him in one of the last cars he engineered. Wardrop worked with me until the end to see if there was something we could do for the next season. It was very sad to see him go.”