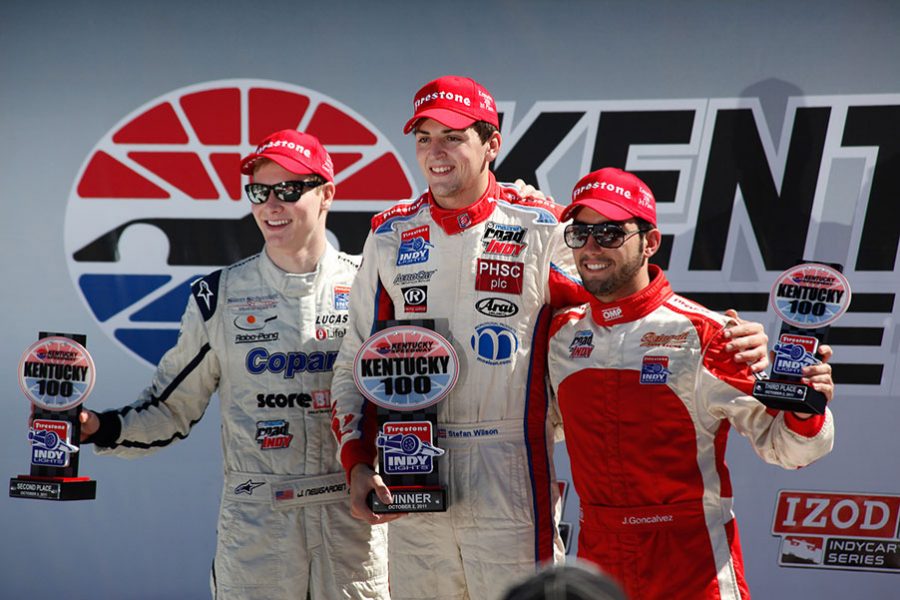 Ovals are not raced on in European open-wheel series. But British native Stefan Wilson wasn’t going to let that stop him. Wilson, a road course expert, would prove in just one season he had what it takes to win on an oval.

His second win and first pole of the 2011 Indy Lights season came at Kentucky Speedway, a 1.5-mile tri-oval.

Entering the race, Wilson was third in the championship points standings. Winning the championship was out of his grasp, but he had a chance at finishing second. Wilson again set his sights on winning to earn every available point.

“It was tough going into that weekend,” Wilson said. “I had a new sponsor that came on board at the last minute, and that secured everything for the rest of my season. We went down to Kentucky, and I was just thankful to be in the car that weekend. I was determined to get a good result for the team and sponsor.

“The car was great right out of the box. We ran quick laps in practice. We ran by ourselves in practice to improve the car for qualifying conditions. In qualifying, we were half a mile an hour quicker than everyone else. I set my second lap record and got my first official pole.”

Grabbing the pole not only set Wilson up for a victory, but it vanished any doubt that he and his team were incapable of winning on an oval. From start to finish, the weekend was the dream for which Wilson had waited. There was no hardship in sight – just victory.

“That was pretty special to get pole on an oval,” Wilson said. “It was important to showcase after Indy and overcome that disappointment of not walking away with the result that would have showed how capable we were as a team, while showing my own development as a driver, as well.

“The track conditions were so perfect; it was so cold. It was such a fast track that weekend. In the race, I had a great battle with Josef Newgarden. We went side by side for like 20 laps, and I was finally able to get around him and take home the win.”