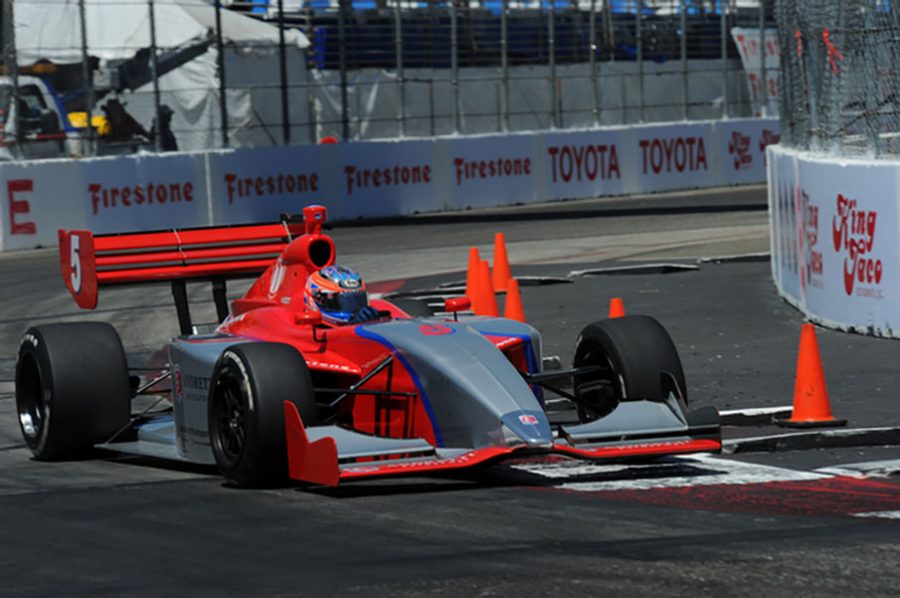 Stefan Wilson’s first full season of Indy Lights was starting to turn around after claiming a podium finish at Barber Motorsports Park. He and the Andretti Autosport team headed to Long Beach.

The iconic street-course event takes place just south of Los Angeles in sun-drenched Southern California. The crowd is full of adrenaline seekers and celebrities all wanting to catch the action at the scenic venue.

Long Beach has played host to IndyCar, Formula One and the American Le Mans Series (ALMS), now the TUDOR United SportsCar Championship. Wilson ended up third in the race.

“At Long Beach we weren’t able to get the starting position we wanted and started sixth,” Wilson said. “I was able to make up position midway through the race. I caught up to the front, but before I could make up too much ground another yellow came out, so I took home third. The finish put us third in the championship standings. It was a relief to make up that ground after losing out on points in St. Pete.

“Long Beach was such a fun track to drive, in general. There’s so much history there, over 40 years of racing. F1 use to race there and IndyCar races there now. So many big names have raced and won there. It’s one of those classic American street courses. It’s what you see on TV growing up. It’s all concrete, it’s raw streets, and that’s what made it cool.”

In addition to the race, many sponsors use the many venues surrounding the street course. Fans and teams attend unique events staged by corporate partners almost every night of the weekend event.

“There’s a lot of off-track activity that makes it memorable,” Wilson said. “IZOD did a pit stop challenge in downtown L.A., which isn’t something you see often. There was a lot of other activation around the race, as well. At track, the celebrity races are always fun to watch. There was just a lot going on with IndyCar, Lights and ALMS.”